Home
Our story
Better places to spend a Friday evening 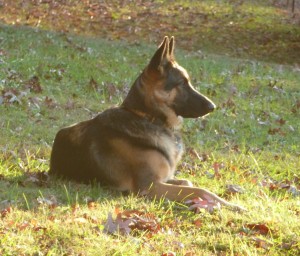 Many of us use ivermectin wormers on our horses, but did you know that a horse concentration of ivermectin is  poisonous even to a large 78 pound dog?  I didn’t, but I now know that some dog wormers use ivermectectin, yet in much lower concentrations.  We recently spent the evening at the emergency vet after our sweet dog probably licked the tip of  a used tube of  moxetectin wormer (another wormer in the same family as ivermectin).

My shepherd and I spent the afternoon at the barn cleaning up the horses. I began the spring shedout grooming, checked feet, clipped bridle paths and wormed. Even though I took my usual precautions disposing of the used tubes, clearly  I wasn’t careful enough. I didn’t catch the quick lick on the end of a tube by a curious dog.

We spent the rest of the afternoon at the house.  Four to five hours later  it became obvious that something was very wrong. Our alert, nimble, bright eyed shepherd was shaky, weak and glassy eyed with muscles twitching. We called the local emergency vet and wasted no time getting there.

We were lucky.  After an overnight at the emergency vet and a big bill  later our girl came home.  That tiny taste of wormer did Daisy no permanent harm, yet it gave us the scare of what might have been and a loud wake up call to be much more careful.

Here’s the big point, there’s  a vast difference in the dose and concentration. The concentration that’s good for the horses is toxic to dogs and we can never be too careful nor should we become too casual in how we handle these products.  What’s right and beneficial for one species may be very harmful to another.

Our goal is to produce a selection of unique specialty gift collections tailored to the equestrian enthusiast, containing the best products available in the marketplace, handsomely packaged and shipped for our customers’ pleasure and delight.